Today is the first day of Advent, the season of anticipation and expectation. We've started playing Christmas music and have put lights up on our house for the first time. I'm... undecided as to whether it looks good or not, which is somewhat ironic since it was my idea. (Rob would not voluntarily choose to put up lights outside, naturally.) We're going to wait until next weekend to get a tree since the Advent season is especially long this year (a Sunday Christmas) and we don't want the tree to be too dry and crunchy by the time we want to light candles on it, but I definitely feel us starting to get ready, to anticipate. I think this time of year is full of expectation and anticipation for pretty much everybody in the western world, but if you're a Christian like I am, then we get to remember that the world waited once for Jesus to come to break in to the darkness and that the world waits again for him to heal all the brokenness forever and to make all the sad things come untrue.

I know I've said this before, but that just doesn't sound like a reason to fall prey to stress and materialism to me.


Or if you're in a more populist, leftist, and/or not-specifically-Jesus-based mood, you could occupy Christmas: 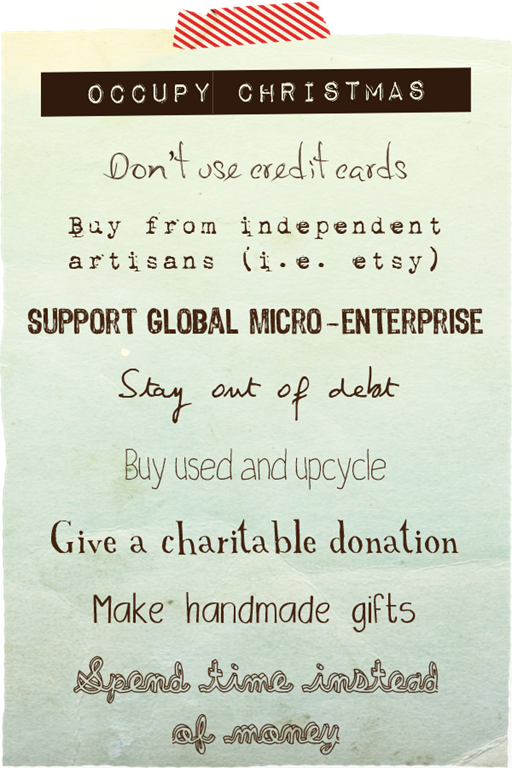 Wherever you're at today as we begin the Advent season, I wish you weeks of rich relationships, meaning, and celebration.
Posted by Julia at 3:04 PM 1 comment:

Things That I Neglected to Do Before Our Portraits Last Week

Things Violet Has Said To Me This Week
Things I Have Done Recently for the First Time Since Lewis Was Born
Posted by Julia at 9:06 AM 2 comments: 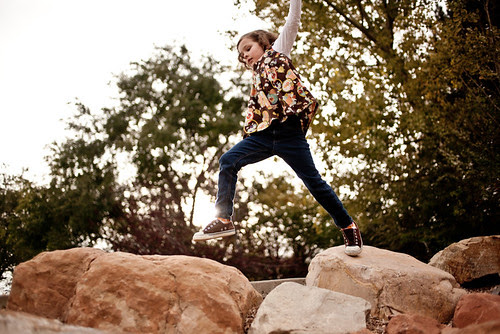 Our friend Michael Friberg here in Salt Lake is a documentary/editorial photographer and is currently raising money to fund a photography project on Mormon culture. Both Rob and I think really highly of his work and we've wanted to ask him to do a photo session of the kids or all of us or something so we were excited to see that one of his backer rewards was a portrait session. We did our session last Friday at a little park close to our house and I am SO, SO happy with his work. I mean, seriously-- are these not gorgeous? I want to get them all printed huge and hang them around our house. (Perhaps I'll restrain myself to just a handful.) He posted some more images from our photo shoot on his Kickstarter page, if you want to see more. There are 11 more days in his Kickstarter project and you should definitely check out his project and consider backing it; there are lots of fun backer rewards.

And if you are local and looking for portraits, family or otherwise, I think that particular backer reward is fantastic, especially when you compare it to what you can spend to get good family portraits. For the curious, Mike gave us about 70 edited images from our session and we're allowed to print them. He might even be able to get things done in time for Christmas cards if you hurry! 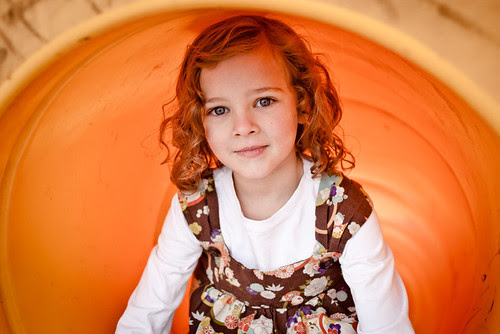 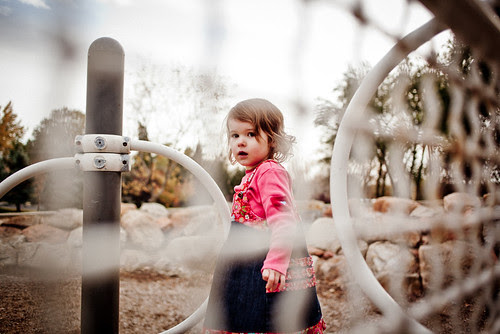 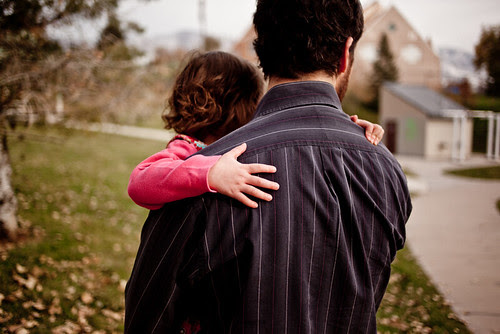 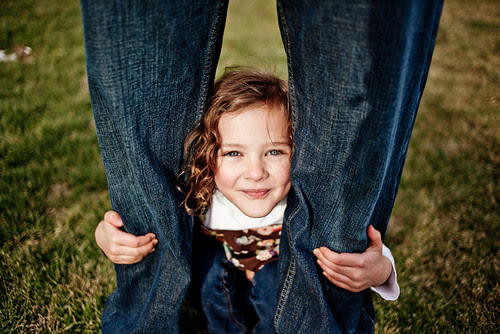 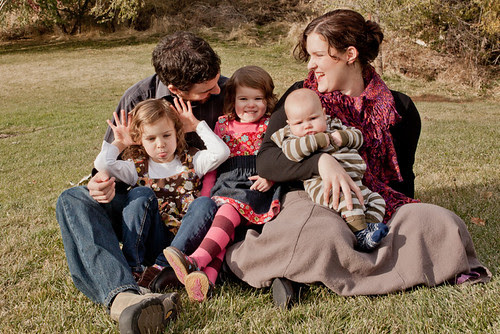 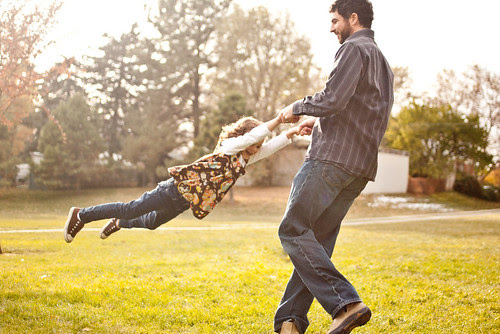 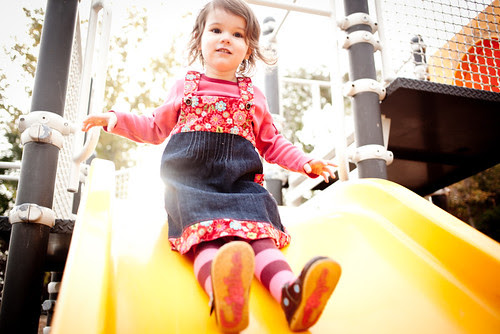 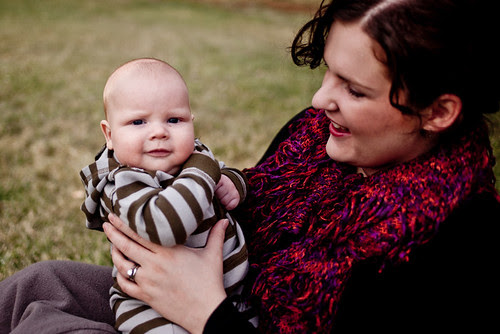 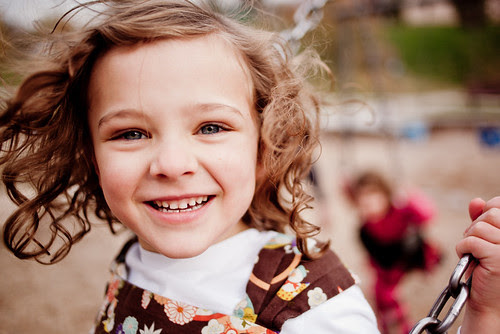 Things have been rough around here lately and my ability to cope with life has been somewhat compromised, although (spoiler!) the fact that I am now editing photos and sitting down to blog means that I have turned the corner and life is more manageable than it has been for the past few weeks. Rob went out of town for an allergy conference in Boston for four nights, and being on my own with three children proved, ahem, challenging. I did have some friends come over in the evenings to help me with baths and bedtime and then to hang out with me; this helped tremendously and I am very thankful for them. However, I haven't ever been a solo parent with a baby this young before, not to mention two older children as well, so even with some help it was a blow to my equanimity.

On top of the travel, Rob has started working out regularly. The plan is for him to do a Crossfit class three mornings a week before work, which I think is reasonable for him/me/us. I have to get up at 5am on the days he goes to work out if I want a shower that day (which, and here is some insight into me as a person, I ALWAYS ALWAYS DO) and he is then not around to help with breakfast/dressing/etc, which is unfortunate but, you know, life is what it is. So one week he had three intro class things in the evenings (so he was not at home for those three evenings), then the next week he went to work out three mornings in a row to get in his three classes before he left town, then right when he got back in town he again went three mornings in a row to get them in that week. All this resulted in me getting up at 5am for three mornings in a row, then parenting solo, then when he got back I got up at 5am for three mornings in a row again. And then I fell over, dead from the HORROR of it all. No, actually, then we had a weekend and Rob was home and I went to have a massage and took naps and I feel much better about things. I did realize how small the margin has been on my well-being and coping with life, however. Hopefully Rob's new (laudable, admirable) work-out routine will be easier to deal with now that we are back to more normal life.

Now we just have to figure how I can somehow start working out regularly. We left the gym where we were members because it isn't convenient to go to that part of town now that Grace isn't at preschool at the same facility, and Rob has been wanting to do Crossfit anyway. (We can't afford Crossfit AND a gym membership.) It gets dark too early for me to go running when Rob gets home. Running on mornings when Rob doesn't go to Crossfit is a possibility, but I am thinking I may get a regular babysitter a couple times a week to go running and then do a video (Yoga? Pilates? 30 Day Shred?) in the basement. I've tried doing videos on my own and it has not gone super well, what with the baby and his unpredictable naps and the toddler and her desire to climb on me in downward dog. Sigh... I'll forgive them, though, because they are so cute. 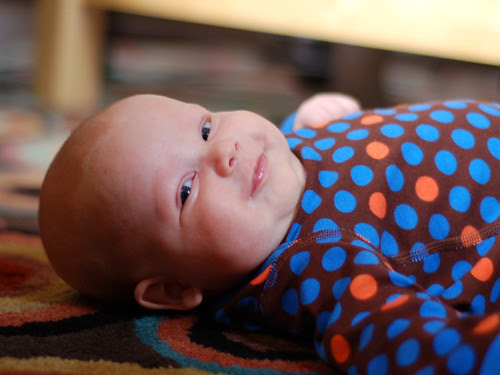 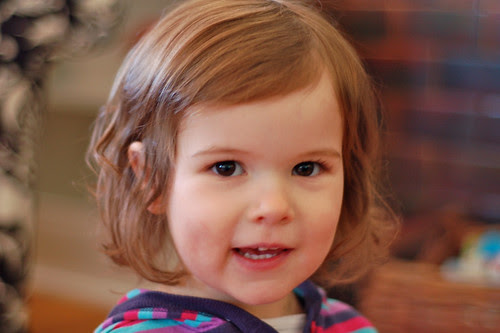 Even without successfully exercising, the pregnancy weight is slowly, gradually coming off. (I really do want to exercise, though, because I want to be fit and trim and healthy, not just at some specific weight.) I am still wearing what I think of as my emergency postpartum jeans but they are getting big. They are two sizes bigger than what I was wearing before getting pregnant with Lewis, which is the SAME SIZE that I ended up in after my 1st and 2nd pregnancies. Actually, come to think of it, my final weight at week 39 or 40 was the same with all three pregnancies to within 5 lbs, even though I started from fairly different weights (Grace - lowest, Violet - highest, Lewis - in between). Biology is weird. I am a bit miffed that I have had to buy clothes in this depressingly large size THREE SEPARATE TIMES, because of course I didn't keep them. On the other hand, the clothes that I bought almost six years ago right after Grace was born would not be super stylish now. In some strange irony, the emergency postpartum jeans I have now in the largest size I have ever worn are "skinny jeans". HAHAHAHAHAHAHAHA... Anyway, I like them and I wear them tucked into boots with loose tops. It took about two years for skinny jeans to look cute to me but I think I'm a believer now. Of course, I'd always rather wear a skirt since they are so much more comfortable, and just better in general.
Posted by Julia at 10:30 AM 9 comments: