A Name for a New Person

We have a name: 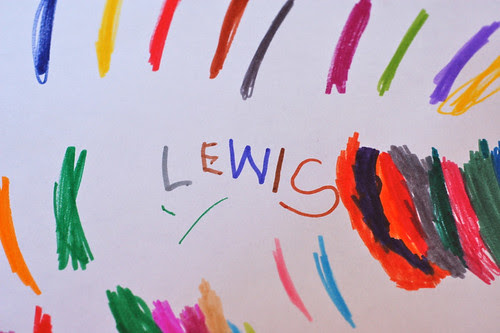 Spelled like (and named after) Clive Staples. This has been our boy name that we've sort of mulled around since before we even started having kids and it is really fun to be actually using it. Rob has always pushed for using Clive instead but I just don't know about that. I am less opposed to the name Clive now than I have been in past years (a decade ago it sounded to me like the name of a bully or maybe a cute dog, but now there's Clive Owen and a lot more quirky old-fashioned boy names going around) but I like Lewis better and we are going to stick with that. We are still a little undecided on middle names and are tossing around two family name possibilities, one from Rob's side and one from mine. There are mild problems with both, unfortunately; one of them rhymes with our last name and one of them, when combined with the first name, is a comedy duo from the 40s and 50s. We'll see; Violet's middle name was totally a last-minute decision and I love it so we'll just have to wait and see how things shake out.

Things around here have made some strides toward being ready for a new baby to come into the house, although not enough to keep me from having classic anxiety dreams (you know, where I have been enrolled in a class all year but haven't gone to it once and am now about to fail, or where I'm in a grocery store and can't find anything I need to buy). My subconscious wants me to TAKE CARE OF WHAT NEEDS TO BE DONE ALREADY.

Have I already explained that we aren't decorating a nursery this time around? There are two main reasons.
So our new little person is officially going to bunk in our room (just like our other babies have done unofficially) and hopefully he will not resent his lack of nursery when he learns about it. Thus, the rearranging we need to do is pretty minimal and I have gotten a start on it, despite what my subconscious thinks. I organized our master closet to make room for some storage drawers for baby clothes, added some under-bed storage boxes to our room, and made plans to get our changing table back in use as such. I think next weekend I am going to have Rob go up in the attic and get down all the baby stuff to clean and set up around the house-- the cosleeper that attaches to our bed , the bouncy seat, the car seat, and so forth. We will still be 5 weeks out from my due date then, which I admit is kind of early to have all that in the house. Or maybe it's not? I have lost all sense of perspective on this and I just need for it to be done.

I did get through a large pile of baby laundry recently. The little diapers are all clean and neatly arranged in their basket and I found all my slings and babywearing gear. And what else does a cliché of a hippie attachment parenting mama need, right? Clothes, I suppose. As you would probably guess, I did not have much in the way of boy or gender neutral clothes. That is, up until about a month ago. In the space of 2 weeks, I got hand-me-down baby clothes from 3 different friends, one of whom had twin boys, and now we are AWASH in baby boy clothes, swimming in a sea of blue outfits. I feel so grateful and overwhelmed with their generosity, and I am so happy to be giving these clothes another round of use instead of buying new ones (the Earth says "yay!"), and AAACK WHERE DO I STORE IT ALL?! Really, I think we are pretty well outfitted through the 12-month size and I have been surprised anew at just how many tiny outfits can fit in one load of laundry as I've sorted through my new stash.

Some sweet friends here in Salt Lake are throwing me a baby shower in a few weeks and I am really excited about it. There isn't a lot that we "need" for the new baby, between the gear we have already (thankfully we bought everything big/expensive in gender-neutral colors) and the hand-me-downs and our general minimalist approach to parenting and whatnot. There are some things that I put on a baby registry at Amazon, but there isn't a lot (and even less that I'll need at the very beginning) and it is really specific things (OK, I admit it-- I am picky about baby stuff) so we decided to go a different direction for the shower. They are doing a "fill the freezer" shower where instead of gifts everybody brings a meal or something for us to put in our freezer and pull out in those intense newborn weeks. I love this idea, especially given the logistics of our specific situation. And what I am really looking forward to is an afternoon of celebrating this new person coming into the world and being encouraged and supported by our community here.

That sounds especially lovely to me right now because I am a bit in the dumps. I am sleeping TERRIBLY and it is hot and oh, I feel so huge. It doesn't seem very real that we get to meet a tiny new person in just a few weeks; instead I just feel enormous and quasi-miserable. I don't really feel an end in sight at this point and my brain is having a hard time connecting all the low-level wretchedness with the end result of a BABY HOORAY. I am hoping that taking some more visible getting-ready steps will help, and I am working to cultivate an attitude of thankfulness about my healthy uncomplicated pregnancy. Six more weeks...
Posted by Julia at 8:41 PM 9 comments:

Hmmm, what have we been up to over the past two weeks? Our air conditioning was malfunctioning for a while, leaving us very hot and also concerned that our ceiling might fall in. I think we escaped with just some subtle water damage on the ceiling and a bill that was not as bad as it might have been. Grace started a little summer camp she is doing 3 times a week for the month of July, with lots of swimming and rock climbing and field trips and whatnot. Also, my dad came to visit us: 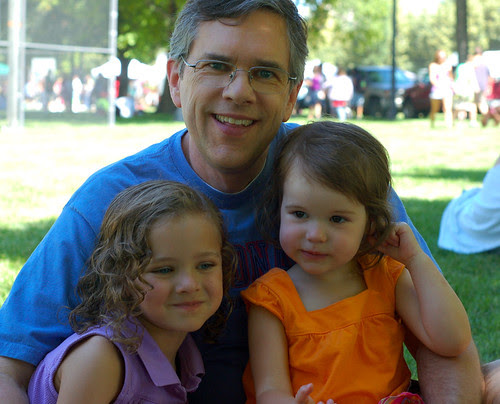 We took him to some of our favorite places around town, like the farmers market and Ruth's and the Park Cafe. We went to the aviary one morning and I just about fell over from the heat (or with less hyperbole and more accuracy, I had lots of contractions and got a headache and my feet and hands swelled up all puffy and uncomfortable). It was a 100-degree day and I think I have fallen out of practice about how to deal with such weather. I seem to remember my main coping mechanism was to refuse to do anything outside until such ridiculousness subsided. Anyway, it was such a lovely visit with him. He came over the Independence Day holiday and we continued our years-long lame tradition of not taking our children to see fireworks. Every year I think, "Oh, we really should take them," and then we think about what our children are like when kept up past their bedtime. Such contemplations cause us to fail to gather the energy/initiative/wherewithal to go somewhere crowded and hot with miserable, exhausted children when we could just stay home and put them to bed. We live far enough north now that fireworks don't start until almost 10pm, and the girls usually go to bed at 7:30pm. One of these years we'll finally do it.

I finished reading Animal, Vegetable, Miracle and am now finding myself compelled to do things like bake my own bread again and learn how to make cheese. It was a lovely, entertaining read and left me all motivated to make the best possible choices about how we eat. It is certainly a good time of year for that kind of thing; we get a lovely box of produce from our CSA every week and the farmers market is gearing up into the lush part of the growing season. It will, of course, be more challenging at other times of year. I really really really want to do some canning and freezing but we don't have quite the right produce ready right now here in Utah for making jam or whatever. Or at least not in the quantities (and at the price) to make it seem worthwhile-- I don't really want to drop $50 on raspberries from the farmers market to make jam, and I don't think I can drag my third-trimester self to a pick-your-own place this July. I was looking through my pictures and realized that last year I did peaches and applesauce in October, and this leaves me a bit discouraged. Am I capable of canning with a tiny newborn around? I would hate to miss a whole year of having luscious golden peach slices to bring out through the winter. We'll see, I guess. Our new meat situation is fortunately not season-dependent; they have their meat available year-round. Have I gushed lately about their pork? It is AMAZING. I have never really cared for pork that much; it usually seemed dry and bland and not very good to me. This meat is like it comes from an entirely different animal (and in some ways, it does; they raise Berkshire pigs, which is a different breed than what is raised in industrial farms) because it is just mind-bogglingly good.

Another compulsion that has recently reared its head is that I want to pack my hospital bag. I keep leaving things like this and this open in my browser and feel the itch to make lists and get things organized and put it all in a bag ready to go. This is sort of ridiculously early (I am 32 weeks pregnant right now) but I guess it wouldn't hurt to get it done, right? And I think I am just going to obsess about it until I do it. In case you are curious, this is what I look like right now, as I perseverate on packing hospital bags and how I will can peaches with a newborn: 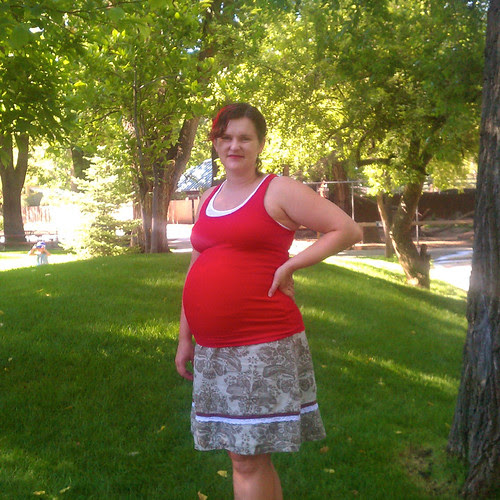 Here's what I looked like at about the same point with Violet: 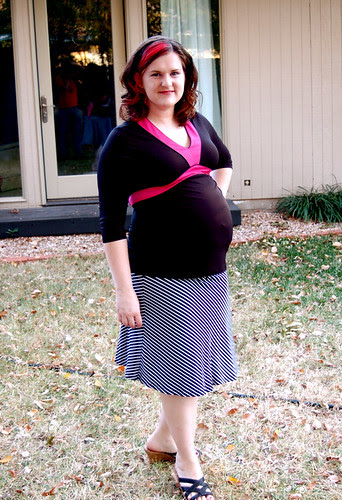 I think I look about the same, taking into account the uncertainty involved in wearing different colors and standing slightly differently and whatnot. (I actually weigh significantly more in the picture with Violet, believe it or not.) What I can't believe is that I am wearing heels at 32 weeks; that's definitely a difference between a summer and a winter pregnancy. And for completeness, here I am with Grace at 31 weeks, although sitting down doesn't really make any comparisons easy or accurate: Three pregnancies, three different states-- gosh, we've moved a lot in the past decade.
Posted by Julia at 9:08 PM 3 comments: