Ten years ago this month, Rob and I got engaged! We had been dating about two years, doing the long distance thing for about 3/4 of that as I was in grad school in Austin and Rob was in med school in Dallas. I was at McDonald Observatory in west Texas for a late January observing run and Rob drove out there, all secretive and such, coordinating with the people who were there to surprise me. He surprised me on the catwalk of the 2.7-m telescope in the middle of the night and is lucky I didn't have a heart attack, because that is not exactly a place one expects to run into other people. Rob had a ring and the stars in the cold winter west Texas sky and it was all lovely and wonderful. Everybody say, "Awwwwwwww..." 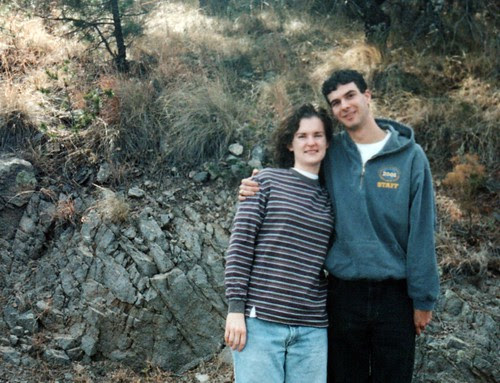 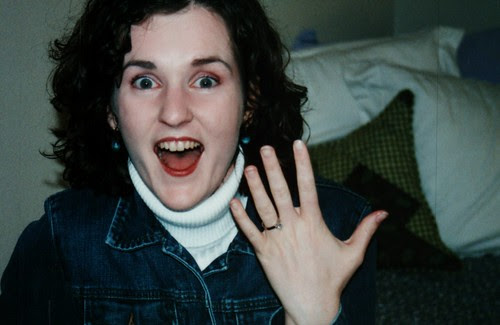 A ring!
A while before we got engaged (in the summer of 2000, to be exact) we both went to Central Asia with Campus Crusade for a summer to teach English and work with college students. Unbeknownst to either of us, some of my roommates went around on the last day we were in the country taking pictures with themselves and random people holding this sign: 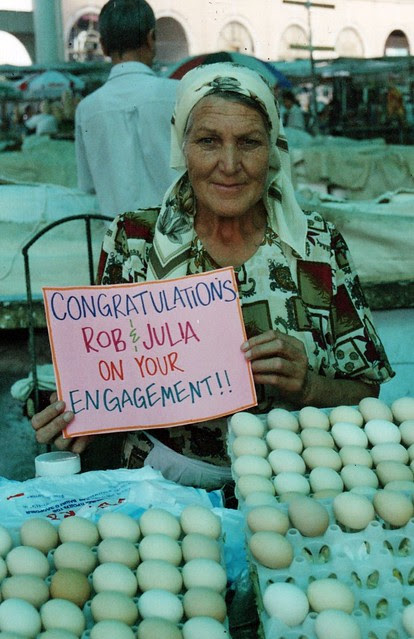 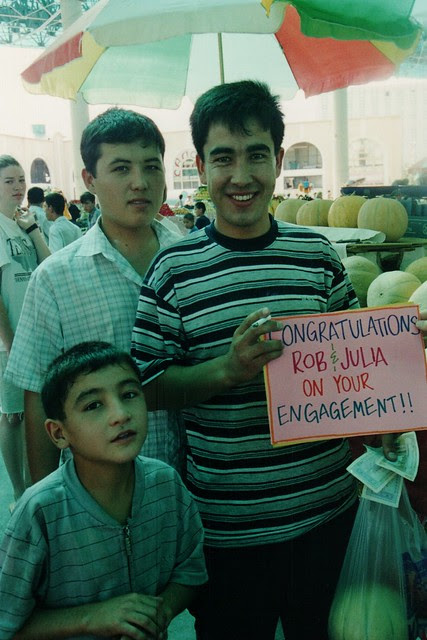 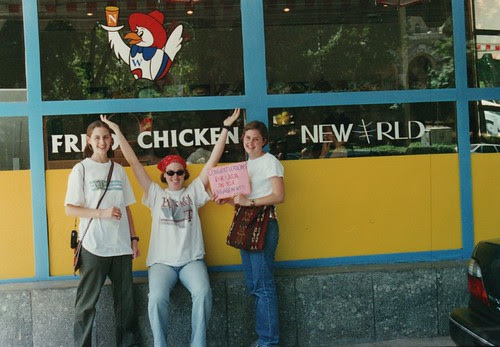 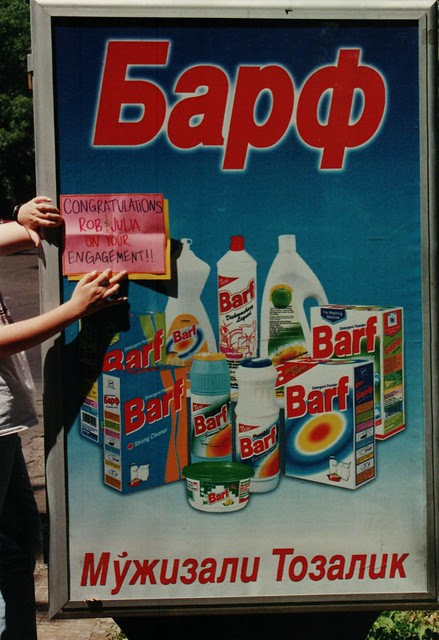 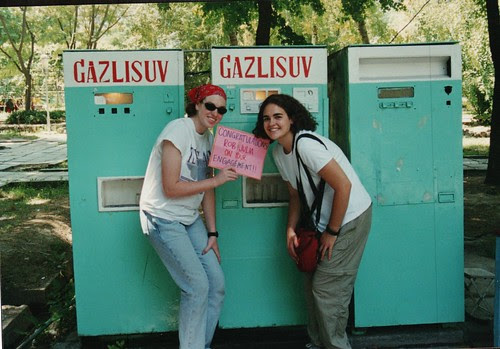 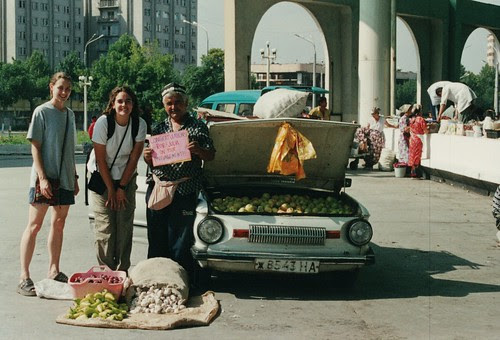 I decided not to put the one featuring a dead goat on the internet.

We had just been dating for about a couple months at the time.  But then... my friends lost the roll of film! They were so sad. But then... another team from our group came to the same city later and found the roll of film in the apartment we all lived in! They developed the film and left the prints in a desk drawer where my friend found them, upon returning to the same city for about a year later! She brought them back to the U.S. and gave them to us after we got engaged and now here they are, for all of you to see.
Posted by Julia at 7:39 AM 8 comments:

We are knee-deep in the new year and so far so good. Grace is back at kindergarten, Lewis weighs 20 lbs (20 lbs! At 4 months old! And is wearing 12-18 month clothes!), and Violet is somewhat unpredictable and perhaps a tad feral. This past fall was entirely consumed by adjusting to life with a new baby and getting Grace settled in at kindergarten and potty-training Violet. There was not much else on our schedule and I think this was a wise move on our part. As we have rung in the new year, I have felt more capable of expanding our life a bit, of perhaps driving children to an activity once a week and being at a certain place at a certain time. Thus, Grace is taking swimming lessons and Violet is doing a gymnastics class at the community rec center close to our house. The former is going more smoothly than the latter; Violet has had not much experience with structured, class-type environments and so far each gymnastics class has involved at least one screaming fit, refusal to sit on a carpet square, and unfocused wandering around the room. It's awesome, let me tell you.

This time last year I found out I was pregnant with Lewis. Can you believe that? A year ago he was a tiny tadpole-like creature, I was queasily miserable, and we were freaking out about the disruption of our carefully-laid-out adoption plans, while today he is this gorgeous squishy smiling baby: 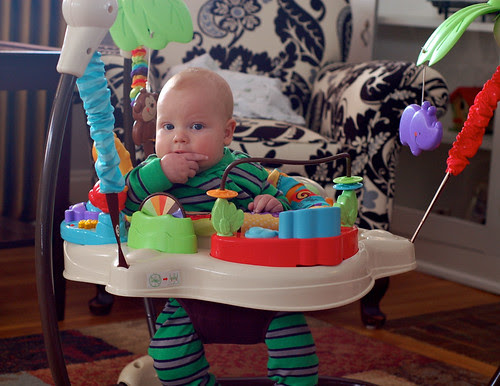 What an unexpected joy... I can't imagine a world without him, the newest love of my life. (The love of my life who has shared a cold with me, the naughty boy.) We are still very uncertain about what will happen with our adoption plans. On the one hand, we still feel as passionate about adoption as ever and it has been something we've wanted for such a long time. On the other hand, I feel like I am bumping up against the ceiling of how many children I can cope with well. Love is certainly not a limited resource, but time is, and so is energy, I think. I know we don't have to decide right now and that having three children will get easier as they all get bigger and gain more independence, but it has been tough to meet everyone's needs in these months since Lewis was born. I think Violet has been the most lost in the shuffle, since her needs are not as immediate and intense as Lewis' but she is not as mature and self-sufficient as Grace. I think the two main areas she could use MORE in are a) cuddles and hugs and physical affection and b) stimulating and interesting things to do. There has been a LOT of free-form unstructured play at our house in the past few months. This is not a bad thing really, but I think works best when balanced with planned fun things to do. Hence, the gymnastics class (which she does love, to be clear-- she's just not very good at being part of a group/class yet).

Also hence, preschool, starting this Thursday. I have been researching preschools and getting my applications in around town at the ones that seem good and are close to our house and all that. It turns out that one of them has an open spot right now (a student moved away in the fall) and we've decided to take it and start Violet at preschool now, two mornings a week. It's a total hippie preschool, which I am fine with but will be a new experience for us as Grace has gone to more traditional preschools. They also call themselves a "creative arts" program and do lots of music, dance, theater, visual arts, etc. When we were visiting, the little class was chanting and clapping with the teachers, "Allegro allegro allegro aaaaaadaaaaagioooooo aaaaaaadaaaaaagiooooo..." I think she is going to have a blast. I also think she is going to be somewhat disruptive and havoc-wreaking, coming into this class that has been together since September and has their little routines and listens to the teachers and whatnot. She will be the youngest in the class and is not particularly mature when it comes to classroom skills. I think the hippie vibe of the preschool will be in her favor in that respect. They know where she is now maturity-wise and say they are totally fine with bringing her up to speed with everybody else. The director was saying she thought it would be 3-4 weeks of transition and then she thinks Violet will do great at participating and listening and so forth.

So starting this week, I now will be responsible for getting TWO children to school at regular times. I can do it! I think.
Posted by Julia at 10:44 AM 2 comments: