Little Lewis, Heading to the Hospital

I briefly mentioned in my last post that we've been dealing with some rather serious health issues for Lewis (who is 20 months old now, as a reminder) lately, so here is the TL:DR version.

Gradually over the past 6 months to a year, Lewis has developed a coughing/choking problem. The cough/choke sometimes turns into a cough/choke/gag, and a handful of times it has turned into a cough/choke/gag/vomit. It has gradually been getting worse; I think the first time Rob and I looked at each other and said, "That's weird," was about 6 months ago. We've noticed it when he's eating and drinking, but sometimes also at other times. It's worse when he is sick, and it has gradually been getting worse overall so that he's actually gagged and thrown up a few times in the past month. (One time, with a bunch of french fries at a restaurant-- SARCASTIC YAYYYYY...) It was those occurrences that finally motivated me to call the doctors and get this figured out. We started talking to our general pediatrician and also asked a friend we go to church with who is on the pediatric GI faculty at the U (who also writes for the Biologos Forum!) what he thought. Our GI started Lewis on reflux medication (because it seems like it might be reflux-related?) and sent us for a swallow study a few weeks ago.

The swallow study is where they watch you swallow foods of different textures and thicknesses mixed with barium via some kind of X-ray imaging; they can see if you are having problems swallowing, which is turns out that Lewis is. He is swallowing liquids into his lungs, apparently all the time. During the swallow study he sometimes swallowed liquids into his lungs without coughing, so it looks like he is aspirating even more often than he is coughing/choking. (During the swallow study, he aspirated with EVERY swallow of liquids, actually. He is swallowing solid food with more success.)

Aspirating, it turns out, is very bad and it is something of a mystery as to why Lewis is as healthy as he is, why he has grown so well, why he hasn't had pneumonia, why he breastfed without any big problems, etc. The most likely scenario is that he has been doing this since birth (he hasn't had any strokes or brain injuries that would make him start swallowing incorrectly) so it is indeed puzzling. One factor in his favor is that he has been breastfeeding since the beginning. It turns out that aspirating breastmilk isn't that bad for you; it doesn't easily grow nasty bugs to give you bacterial pneumonia and it isn't irritating to the lung tissues. I am once again so thankful that breastfeeding has worked out for us and our babies; we likely could have been dealing with all these health issues when Lewis was a tiny newborn instead of a strapping, healthy toddler if it hadn't. I don't minimize my own preparation and commitment in making breastfeeding work, but some of it really is out of my hands, and I am so thankful. I'm actually REALLY thankful right now because we are not supposed to give Lewis any liquids but breastmilk, not even water, until we get this sorted out; water in your lungs is irritating and there is a risk of him getting pneumonia from it. He had been down to nursing just a few times a day but I'm trying to get my supply back up and Lewis to nurse more frequently. I will admit that we haven't totally cut him off from water, because he is finding it upsetting when he feels thirsty. It's a risk, but as Rob keeps pointing out to me, he has been drinking water for a year without anything really bad happening. It is stressful, though.

So now we have to figure out why he is aspirating. One possibility is that there is something anatomically wrong (like a cleft or a fistula or a hole or something), another possibility is that it's really terrible reflux or something similar (it turns out that you can get reflux so bad that you lose sensation in the back of your throat and can't coordinate your swallowing), or another possibility is that he just plain never learned to swallow correctly, for unknown reasons. The positive here is that there is a way to fix any of those problems: surgery or medication or feeding therapy or some combination of those. We went to an ENT surgeon recently to talk about all this. They put a tiny camera up his nose and back into his larynx, which was strangely non-upsetting to him. He wasn't sedated or anything, just sitting on my lap. He squirmed when it was going through his nose but he sat there, totally calm, once it was back further (because he can't feel anything back there?). The ENT couldn't see any huge/obvious anatomical problems but he did see a lot of irritation and inflammation like he has reflux. The uncertainty is if the reflux is the original cause of the whole thing or a result of another problem.

Some of you who know me in real life might remember that WAY back when he was 6 months old and we first started feeding him solids, he had some swallowing issues. When we first offered him any foods, he would gag while trying to swallow and then vomit up everything in his stomach. He did that for about a couple of weeks, then figured out how to choke the food down, gagging but not vomiting. A few weeks after that, he figured out how to coordinate his swallowing enough to eat solids pretty normally, and we went merrily on our way, thinking he just had a strong gag reflex and he figured things out. But did he? Or was that part of what's going on now? We still don't quite know.

The next step is that Lewis has to have an outpatient procedure where our GI and our ENT will check things out in more detail. They have to put him under general anesthesia (aaaaaaaaaah...) but I guess it's not exactly a surgery because they are just looking at things? From our end, the experience will basically be like an outpatient surgery, though. They will do an endoscopy and a laryngoscopy (i.e. they will look at his esophagus and his airway in detail) and hopefully we will know where to go from there. If there's something anatomically wrong to fix, we can fix it. If not, we will do feeding/swallow therapy. In the meantime, we keep him on the reflux medicine (which he has been on for a couple weeks now and maybe Lewis is choking/coughing less? I don't know...), he gets to nurse as much as he wants, and we hope and pray that he continues to avoid pneumonia. His procedure is scheduled for May 30, three weeks from now.

We are feeling a bit surprised and shaken by all this, as Lewis has never been sickly or seemed vulnerable health-wise. We are definitely dealing with some stress and anxiety about the situation, but we feel confident in our doctors, the children's hospital here where Lewis will have his procedure, our support structure here in Salt Lake, and the care of the One who loves Lewis even more than we do. 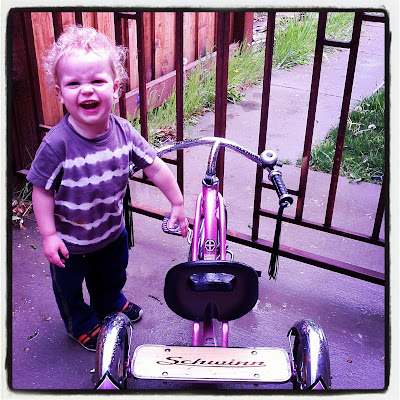