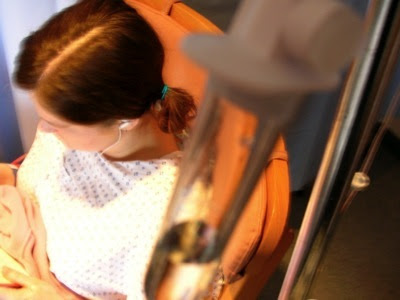 Disclaimer: The following contains references to medical procedures, bodily fluids, and general ickiness which may not be appropriate for those squeamish about such things.

Several people have told me that I should be sure to write out the story of Grace’s birth now while the memories are fresh in my mind, so here I go. Hopefully it won’t give our family and friends the heebie jeebies or anything...

Grace was due on February 7 and on February 11, things finally got going. My waters broke about 6am Saturday morning. My OB practice gives you 24 hours after your membranes rupture to go into labor on your own (waiting longer than that increases risks for infections and complications and things), so we went up to the hospital that afternoon just to get checked and to confirm that the amniotic membranes were ruptured. Rob and I spent the day around the house, and although the intermittent contractions I’d been having for weeks did intensify over the course of the day, they were way too far apart to be called labor.

Sunday morning found us at the hospital bright and early, ready to start our induction. They hooked me up to the external fetal heart monitor and contraction monitor (the kind they strap around your belly), along with the IV for the fluids and pitocin. We started out with a teeny tiny dose of pitocin and over the course of the day, slowly increased it. The contractions gradually became more intense; by early afternoon, I was having to really concentrate on coping with the pain of each contraction. The contractions didn’t seem to go through the phases of labor we learned about in our childbirth classes, no doubt because it wasn’t my own body guiding the labor. I haven’t experienced any other labor (obviously) but I would certainly not contradict the people who say that pitocin makes labor more intense and difficult.

By early evening, I wasn’t coping well with the pain and decided to ask for pain relief. They checked the progress of my cervix’s dilation, and I was at 4cm. (They hadn’t checked earlier because of the increased risk of infection from the ruptured membranes.) Since I was that far along, we decided to go with an epidural. Having the epidural placed was a weird experience but I was sure it was the right decision for me in that situation. And talk about a difference! I really am amazed at modern medicine. Once the epidural was in full effect, I could feel each contraction but I perceived them as pressure, not pain. I could still feel and move my legs and abdomen and did not feel at all numb. Unfortunately, I was no longer allowed to get up out of bed because my legs would be too weak. I had found things like the birthing ball and changing positions really helpful earlier in labor, but exchanging those coping mechanisms for the epidural was definitely worth it in this case.

A few hours later, we started to run into some trouble. Grace had been tolerating labor well through the day, but about 12 hours into it, the heart monitor showed that she was not responding well to each contraction. They eventually turned the pitocin totally off to give her time to recover and placed a different, more accurate kind of heart monitor on her (the kind that goes up through the birth canal and attaches to her scalp). With the pitocin off, Grace did much better but unfortunately my contractions became really weak and infrequent. They turned the pitocin back on at the teeny tiny low level where we started the morning, and my next contraction was this really intense long one that caused Grace’s heart rate to plummet. No good, no good at all.

At this stage, it looked we were headed for a C-section-- troubled baby on pitocin, no contractions off pitocin. They checked me again and I was only at 5cm, so there was still a lot of labor to go. Rob and I asked if we could take an hour to see if labor might pick up on its own before we headed into a C-section; the doctor said he didn’t feel comfortable with that much time but would wait 30 minutes. I signed the consent form for the surgery and Rob got his funny OR jumpsuit and we adjusted to the idea of a surgical birth; we were feeling disappointed about it but felt convinced that it was the right decision. In the meantime, the OR got backed up (divine intervention!) and it turned out that we waited about an hour anyway. In this hour, my contractions started up at a respectable rate of every three minutes and Grace looked like she was doing great on the monitors. Rob was watching the monitors saying, “OK, this kid is just messing with our minds now.” The doctor came back in to check me one more time before going into surgery. He found that I’d progressed 1.5cm and since the monitors looked so good, the C-section was put on hold. Hooray!

In another hour I was fully dilated and Grace continued to do well. My epidural had started to wear off, which is what they intend so that you can feel to push effectively, so I was experiencing pain again but not nearly as badly as on the pitocin pre-epidural. We pushed for 2 hours; it was really hard work and hurt but in a different way than the contractions. It was exhausting, actually, and near the end I was really starting to run out of energy to push effectively. We ran into another little hurdle as I struggled to finish pushing, and the OB suggested an episiotomy. I said I would try a few more pushes on my own but when those didn’t work, I happily acquiesced to a medium episiotomy. Grace came out quickly after that, and was born at 2:24am on Monday, February 13.

I had a fever by the end of labor which could indicate an infection so Grace had to be checked out immediately after birth by the pediatricians (and I had to have a bunch of IV antibiotics). She looked great (which you can see for yourself in the video) and they brought her back to me as I was being stitched up and put back together. Rob bringing her over to me and holding her for the first time was, as cliched as it may be, a fundamentally life-altering and wonderful moment.

Things that surprised me about labor

To sum up this very long account, I’ll just say that the rest of our hospital stay was smooth and uneventful. Both Grace and I did splendidly and the three of us are glad that the experience of labor had such a wonderful outcome and that we are enjoying being a family now.
Posted by Julia at 1:10 PM No comments: 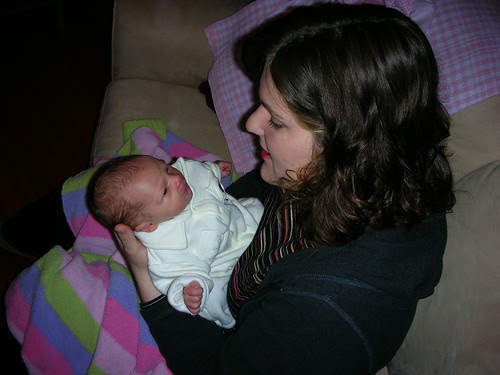 A honeymoon is that first bit of time in a new marriage when the new couple adjusts to life together. Rob and I are about a week into our babymoon now; everything is so new and different and changed forever. This time is so unique in its place in the course of our lives. Most of it is spent wrapped up in the details of taking care of a new baby. Grace needs to eat again! Time for a new, non-poop-covered outfit! Going to the bathroom or eating lunch now involves logistical decisions! However, I continue to have moments when the fog of details lift and I am overwhelmed with the realization of how utterly wonderful this all this. No exaggerating-- I cannot believe how happy I am and how much this tiny individual makes us stop in our tracks with joy.
One thing that has amazed me is how tiny Grace is. She isn’t actually that small for a newborn; she weighed 7 pounds at birth and probably is on her way to gaining back her birth weight by now. Part of the reason for my surprise is that we were actually expecting a bigger baby. Grace came into the world about a week past her due date, and several of the OBs kept estimating her size at over 8 pounds. (What does that tell you about how much weight I gained? I’m sure there will be more on that in some future entry...) More than her actual physical weight, though, I think it has surprised me how tiny that 7 pounds feels. The metaphorical heft of her entry into our lives seems so huge that her tiny physical self seems impossible.

Her clothing situation only exacerbates my perceptions, I think. This has come as a shock to me, but her clothes are all huge on her! Even the newborn size clothes! Every item of clothing she has must have its sleeves rolled back if there is any hope of finding her tiny hands. The bodies are so big that she pulls her little arms inside her clothing, leaving us with an apparently armless baby. Our first experience with this came the first time we dressed her in her own clothes in preparation for our trip home from the hospital. Grace’s outerwear is a lovely fleece hooded bunting, and I am now pretty darn confident there is no danger of her outgrowing it before spring has unequivocally sprung. When we put it on her in the hospital, her entire body fit into the torso section, leaving the bunting arms and legs pretty much empty. I find this whole thing puzzling because the newborn size is supposedly the appropriate one for her current weight. Perhaps this is her introduction to the mysterious world of women’s sizing where the numbers don’t really mean anything?

I know this will be a fleeting time and soon she will be growing gangbusters. I’ll have that experience common to motherkind of picking up an outgrown article of clothing and being struck by the lightning fast changes in who my daughter is and who she is growing to be. For now, I’ll keep dressing her in these giant onesies and kissing the soft warm curve of her skull as it is today, right here in the now during our babymoon.
Posted by Julia at 9:08 AM No comments: