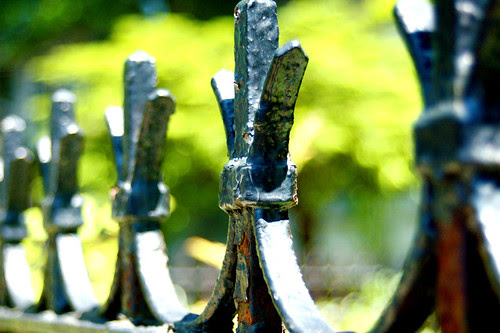 Our apartment here may have its downsides, but it has been a pleasure to get to know our new neighborhood and explore it. The house we owned was actually in Hamden, the town/suburb just north of New Haven, which was lovely in its own way, with its green spaces and lovely streets and 1920s’ era houses. Now we are down in New Haven proper, in a neighborhood just off the Yale campus filled with close-spaced Victorian homes that have been divided into apartments to be inhabited by grad students and postdocs. Going for walks around here has been a delight, especially as spring has advanced and we have balmy, 70-degree afternoons. We can walk to East Rock Park (from which the neighborhood gets its name) and Nica’s (which has seen a LOT of our business due to our not-very-functional kitchen), or just walk up and down the lovely streets. Our particular street is mostly 1850s’ houses, which are pretty plain and not much to speak of, to my profoundly uneducated eye, but things apparently took a turn for the Victorian when it came to build up the blocks around us. The houses are so beautiful and lots of trees are blooming; it’s a lovely time to be outside in this neighborhood. As I walk around, I am always curious about the histories of these houses. I think old houses are especially compelling to me because I grew up somewhere where very little was older than about the 1960s. I always wish I could know when they were divided up into apartments, what kind of people lived in them through the decades, and what their lives were like.

This neighborhood is also super fun because the Yalies tend to be an international group. When I take Grace to the playground, I always get to see and talk to moms from all over the world. Languages I have heard called after little ones going down the slide or digging in the sandbox include French, Russian, Hindi, Korean, Chinese, Hebrew, what I am guessing was Farsi, and a few I couldn’t identify. In the late afternoon there is sometimes a team of miniscule soccer players practicing and their coach is a grad-student-aged Scottish guy. It warms the cockles of my heart to hear his brogue drifting across the practice field as he shouts encouragement to the tiny soccer players. I should shut up already about the annoyances of this apartment or Rob won’t believe me that I really would like to live overseas at some point.

We were recently talking about New Haven and how if you’re going to move super far away from everyone and everything you know, this is a nice-sized city for it. It’s a metro area of about 850,000 (half the population of the Austin area, for our Texas readers) and is small enough to be easy to find your way around, to feel like you have a handle on what is what, etc. It felt comfortable and not overwhelming to me quite quickly, despite having such a different vibe from anywhere I’ve lived before. And I still chuckle at how often I run into people I know at the farmers’ market, the library, and Trader Joe’s. I wonder how I would like living in an actual small town... Not something I am likely to find out anytime soon, as we move back to the 4th biggest metropolitan area in the U.S. Six million people-- sheesh!
Posted by Julia at 8:05 AM No comments:

The Case of the Missing Fireplace 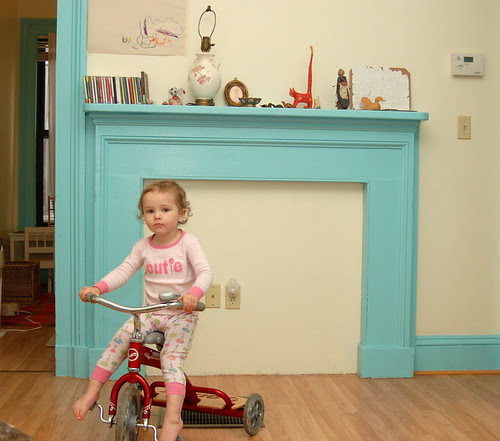 So we are here, installed in our new digs and settling into this somewhat transient, temporary home. For those not following along at home, we sold our house a little on the early side so we had to find a place to stay for a while before moving to Texas. Things worked out really well with this particular apartment. Its normal occupants are a math professor visiting Yale for two years, his wife, and three-year-old son. They are jaunting about the world for the summer and subleasing to us for the couple of months between when we moved out of our house and when Rob finishes up his residency. Lots of things about this place are great. It is one of the least expensive options we found for a temporary apartment, they are totally not making a big deal of us bringing Abbey, they have a room set up for a toddler with a little bed and everything, and it’s in a great neighborhood with a park, lots of delightful walking, and a fun little market and cafe. They just left it furnished with all their stuff in it, and we packed up all our stuff in moving containers and just brought clothes, the computer, some toys, etc.

As often happens in life, it is not a uniformly wonderful situation, however. The kitchen and bathroom of this apartment leave something to be desired. The kitchen doesn’t have a dishwasher (which I knew ahead of time) or a garbage disposal (which I didn’t) and is teenyteenytiny with barely workspace enough for a cutting board or a bowl. This isn’t too much of a problem because it turns out that this apartment’s normal inhabitants aren’t much for cooking and there are very few items with which to cook. Here are a few things I have searched the tiny kitchen for in vain: cutlery beyond a table knife, a measuring cup, a can opener, and a spatula of any kind. Cooking utensils of all types are represented by one lone wooden spoon and there is one cutting board that is about 5” square. This has been quite a shock to my routine, as I am a cook-from-scratch person most nights. The bathroom is less than could be desired as well, as there are some leaks, a small hole in a wall, and a lot of soggy drywall; the whole thing smells a bit mildewy and like wet plaster. Rob spent almost an hour last night thoroughly cleaning the bathroom, for which he has my undying gratitude, and it is a lot better now.

I don’t want to be overly precious about my physical environment so I am trying to concentrate on the positive things about living in such a fun neighborhood and on how temporary this all is. I may be tempted to use the words squalid and decayed, but that would be a definite exaggeration. I know I am so spoiled with a history of living with shining suburban kitchens, mostly recently one we renovated ourselves, and soon we will move to a house with another lovely kitchen. Surely contentment in such a tiny trial is not out of reach.

And in between the good and the dreadful lies the, well, mysterious. We have two of these phantom mantels in the apartment. This apartment is the first floor of an old house built in the decade leading up to the Civil War and I have no idea if there were originally fireplaces there, or if the mantels were always purely decorative, or if darker forces are at work and the fireplaces have fallen prey to foul play sometime in the past century and a half.
Posted by Julia at 9:08 AM No comments: