Spring has passed into summer in a haze of medical drama, family/children's activities, work, and trying to stay up on laundry and making dinner. The solstice has come and gone, my hemisphere is tipping away from the Sun, and I realize more as each week passes that these are the blurry years, a whirlwind of three small people and two jobs and two schools and a house and piles of laundry. I'm content -- happy, even -- but I seldom catch my breath.

In some rather unfortunate twist of medical bad luck, very soon after I wrote that last post about Lewis in May, Grace got really sick. It was an unprecedented level of illness for our family, all the more unnerving because Grace usually gets the least sick of anyone in our family. When we pass a virus around, Violet and I tend to get the most dramatically ill while Grace will be grumpy for a day without any actual symptoms. She came home from school with a fever one afternoon and then her fever stayed very high (often over 104°) for several days. She wouldn't eat and would barely drink, medicine wouldn't bring her fever down, and she was disoriented and confused. Her fever got a bit lower after a few days (102° or so), she had a positive strep test but then did not get better on antibiotics, and we ended up being concerned she had something really bad because of some of her other symptoms. We were within about a day of admitting her to the hospital when her fever FINALLY dropped to 100° and lower. In hindsight, the best anyone can guess is that she had some crazy virus (that none of the rest of us got? I still am not sure that makes sense...) but whatever it was, I am just glad it ended without any worse outcome than Grace losing some weight and missing a week and a half of school.

Soon after that, Violet had her last day of preschool, with a party and opportunity for me to reflect how well her time at the JCC has gone. I am very thankful for her teachers and the professional help we've pursued, as well as her own amazing self; she is in such a different place than she was 9 months ago. She still does not have a diagnosis or label, and it's looking likely that she won't have one, but I feel very good about the help we've gotten through the Children's Center and the change we've seen in Violet. We'll be back at the JCC for Violet's pre-K year in the fall, and then I don't know what we'll do. BECAUSE SHE IS READING. (Or is very close, at least.) She is about a year ahead of where Grace was at the same age reading-wise, and as she doesn't have the people-pleasing personality full of empathy and maturity that Grace has, I feel very uncertain about regular kindergarten. We'll cross that bridge when we get to it, I suppose. 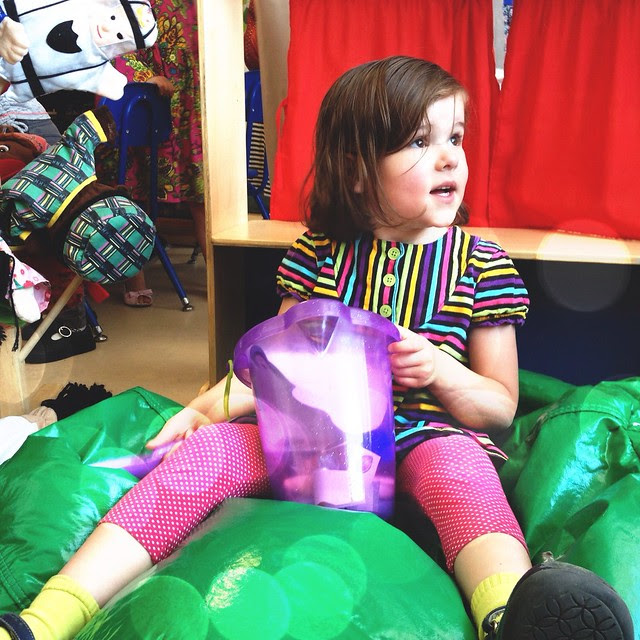 At the very end of May, Lewis had his procedure at the hospital. On one hand, everything went smoothly and safely and the doctors and nurses were all fabulous; on the other hand, GAH I never want to do anything like that ever again. 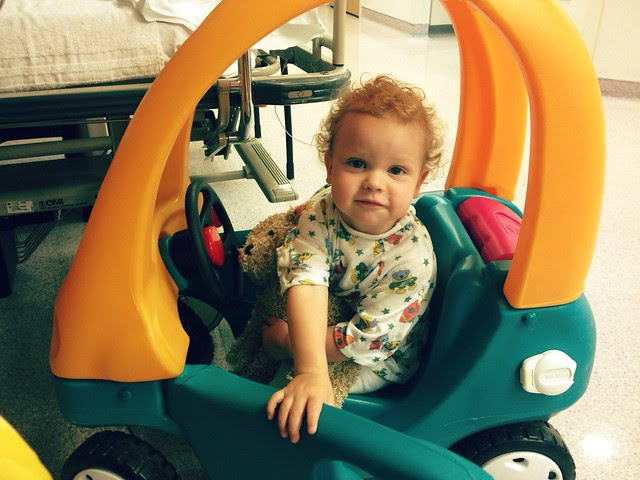 We were at the hospital for about 5 hours total, less than 2 hours of which he was under anesthesia. They did a great job at the children's hospital being sensitive to the kids there and making things easy for them; this picture shows him in his little hospital gown and his hospital car that he got to ride around in from one place to another. He was pretty grumpy by the time they actually took him back for his procedure because he was so hungry and thirsty (from not eating/drinking for so long) but in general he was content. He came out of the anesthesia calmly, and then he nursed pretty soon after waking and was pretty easily comforted. He seemed out of sorts and sleepy the rest of the day, but he wanted to eat, didn't seem to be in pain, and didn't throw up or anything. I was a bit of a mess at the hospital (crying when the nurses asked me what would comfort him if he was in pain, etc) but really, it could hardly have gone any more smoothly.

The ENT said he saw a lot of inflammation in his airway consistent with him aspirating but did not find any reason why he is aspirating (no clefts or other anatomical problems). Our GI took biopsies and they showed that he has moderate reflux damage in his esophagus and eosinophils in his small intestine, which is like a food allergy thing. Neither one of those seems like it's the big explanation for his aspiration that we've been looking for, but we're trying to move forward and figure out what to do next. Last week, we had a feeding evaluation with a speech therapist (who it turns out are the people who do feeding/swallow therapy). I was expecting that this would be the beginning of swallow therapy, i.e. fixing all this, but the therapist concluded that he does not have any oral motor problems that they can address with therapy. This came as a surprise to me and felt kind of frustrating; it's good news that he doesn't have any oral motor problems but I was thinking the swallow therapy was going to be the thing we did to fix everything. Apparently not. We do have some things we're trying (new kinds of cups, thickened liquids, etc) and we're headed to see an allergist (OH, THE IRONY...) next week to see if we can figure out any food issues he has. He is still vomiting pretty frequently, and he still does a lot of coughing/gagging; we can maybe convince ourselves that it's started getting better since we started the reflux medicine? I don't know.

I thought I was coping OK with all of this, but in the week after Lewis' hospital thing, I lost my voice, had all kinds of GI misery, and got two migraines. It was totally stress; these are all the quasi-psychosomatic things my body does in times of high stress. Life needs to CALM DOWN. Also, I need to figure out how to cope with stress.

At the beginning of June, Grace had all her festivities to end her time in 1st grade. There was a school-wide fun run... 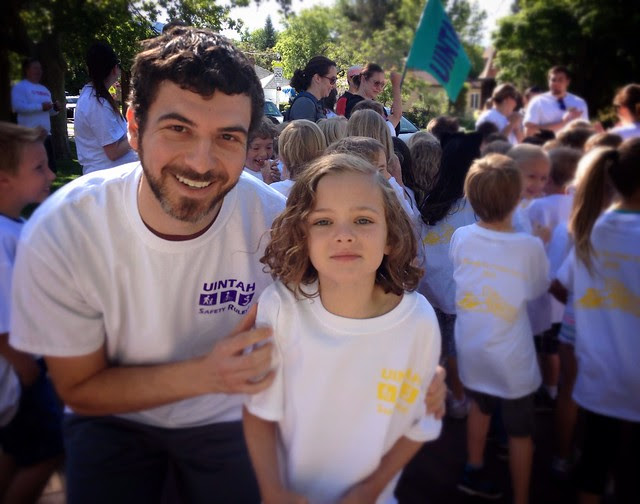 And a big 1st-grade performance (Grace is one of the ones in red on the front row)... 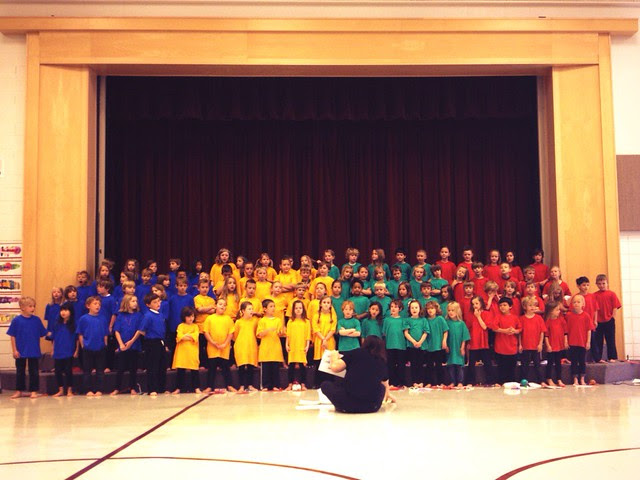 And then walking off to her very last day as a 1st grader... 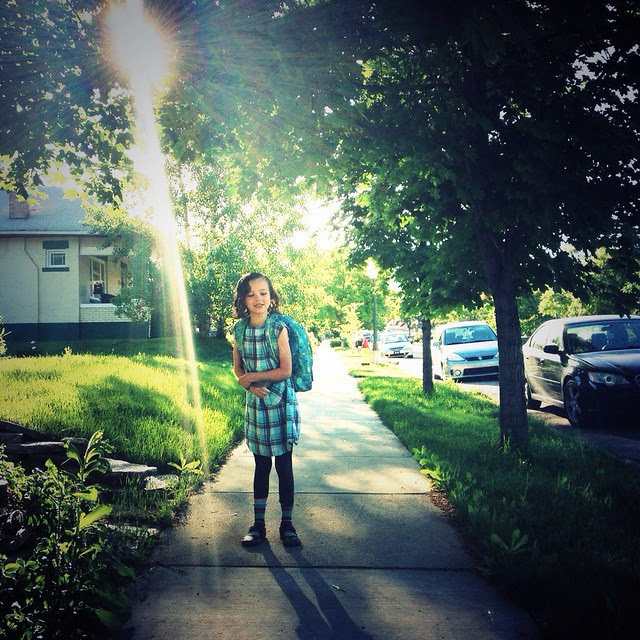 And now we are deep into summer. Our CSA is bringing us lots of beautiful vegetables, Grace is on a swim team at the JCC, and we have turned on the air conditioning in our house. Violet is going to a social skills group at the Children's Center over the summer. It's pretty interesting, actually; it's like a preschool environment with crafts/games/songs but all the activities are specially designed to develop the children's peer-to-peer interaction skills. She's the only one in her group without an autism/Aspergers diagnosis, but they are all about at the same level verbally so it works well. The clinicians in the group are students getting their masters in speech therapy up at the university here, and the two that Violet has in her group are amazing. And then Grace is doing some science camps at the natural history museum and Violet is doing gymnastics. Lewis is learning new words every week, frustrating me with his unpredictable napping, and giving the best hugs. It's all going by in a blur, but it's a blur of the amazing, tangled, messy, and beautiful.
Posted by Julia at 2:28 PM 1 comment: